All is One, One is All: Where Do All the Elements Come From?

All of the stuff around you — your desk, computer, lukewarm coffee, your body — all of it has undergone a very long journey to get to where it is now. The different elements seem so fundamental we often fail to wonder where they came from; they just seem like they've always been there. In fact, the elements of the universe all come from very diverse sources, each with different conditions predisposing the production of, say, osmium over sodium. The figure below shows all of the different sources of the different elements. Here's what each category means. 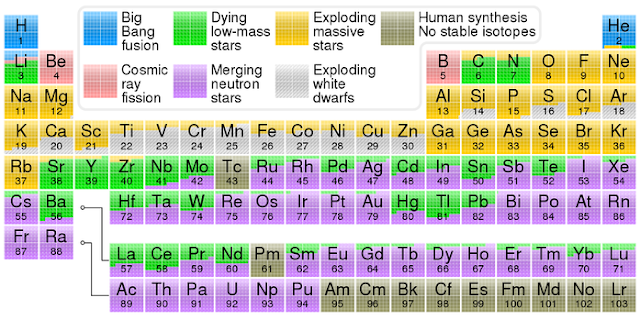 On the other hand, virtually all the atoms you come in to contact with through the course of your life, the ones in the ground beneath you, the air you breath, the food you eat, those that make up every living thing, including you, have existed for billions of years and were created in places very unlike our planet.

How those atoms came about is what I want to share with you. It all started 14 billion years ago with an event we call The Big Bang, which resulted in a universe consisting of gas alone. There were no stars and no planets. The gas was made up only of atoms belonging to the simplest elements. It was about 75 percent hydrogen and almost all the rest was helium. No elements like carbon, oxygen or nitrogen existed. No iron, silver or gold. In some places, the density of this gas was slightly higher than in others.

Due to gravity, those places attracted even more gas, which further strengthened the pull of gravity, which then drew more gas in, and so on. Eventually, large dense gas balls formed, shrinking under their own gravity and consequently heating up on the inside. At some point, the core of such a ball gets hot enough that nuclear fusion occurs. Hydrogen atoms smash together to form helium, accompanied by a great release of energy, strong enough to counteract the shrinking force of the gravity. When the energy pushing out from the fusion reactions matches the gravity pulling all the gas inwards, an equilibrium occurs. From this a star is born.

Over its lifetime, the fusion reactions in the core of a massive star will produce not only helium, but also carbon, oxygen, nitrogen and all the other elements in the periodic table up to iron. But eventually, the core's fuel runs out, leaving it to collapse completely. That causes an unbelievably powerful explosion we call a supernova.

Now there are two things to note about how supernovas create elements. First, this explosion releases so much energy that fusion goes wild forming elements with atoms even heavier than iron like silver, gold and uranium. Second, all the elements that had been accumulating in the core of the star, like carbon, oxygen, nitrogen, iron, as well as all of those formed in the supernova explosion, are ejected in to interstellar space where they mix with the gas that's already there. History then repeats itself. Gas clouds, now containing many elements besides the original hydrogen and helium, have higher density areas that attract more matter, and so on. As before, new stars result. Our sun was born this way about 5 billion years ago.

That means that the gas it arose from had itself been enriched with many elements from supernova explosions since the universe began. So that's how the sun wound up with all the elements. It's still mostly hydrogen at 71 percent, with most of the rest being helium at 27 percent. But bear in mind that while the first stars were made up of hydrogen and helium alone, the remaining elements in the periodic table make up two percent of the sun. And what about Earth?

Planets form as an incidental process to star formation out of the same gas cloud as the star itself. Small planets like ours don't have enough gravity to hold on to much hydrogen or helium gas since both of those are very light. So, even though carbon, nitrogen, oxygen and so on made up only two percent of the gas cloud from which Earth was formed, these heavier elements form the bulk of our planet and everything on it.

Think about this: with the exception of hydrogen and some helium, the ground you walk on, the air you breath, you, everything is made of atoms that were created inside stars. When scientists first worked this out over the first half of the 20th Century, the famous astronomer Harlow Shapley commented, "We are brothers of the boulders, cousins of the clouds."

Want more? >>>>
How Big is Infinity?
Using the fundamentals of set theory, explore the mind-bending concept of the "infinity of infinities" -- and how it led mathematicians to conclude that math itself contains unanswerable questions. [Lesson by Dennis Wildfogel, directed by Aaron Augenblick, narrated by Dennis Wildfogel].

All is One Elements Hydrogen One is All Universe