Commonality: You, Me, God (and Infinity) 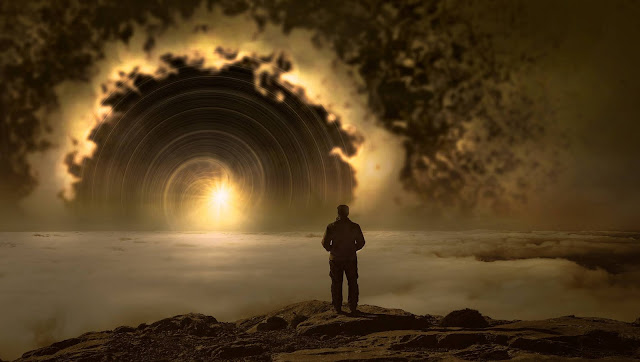 by Michael Corthell
It is much easier to relate to and bond with people when we recognize our commonalities. And we can form bonds easier with people if they are present.

As people, we can relate much better to another person than to a plant for instance. That's because there's a wide difference between a human being and flora, therefore there is little relatable commonality.

As we share more likenesses with an alien lifeform, relating becomes easier. Even if we can't relate well to a plant, we can relate a little better to an animal, especially a pet animal. Why is that? Simply, animals are more similar. Again, the more commonalities that exist between two entities, the greater the possibility there is in relating to them.

I define God as omnipresent; ''all of existence,'' ''the entirety of the universe(s),'' or simply ''reality itself.'' -- all inclusive. God as the whole. God's parts include all created objects, how they relate to each other, and the laws that allow for interaction. God is the totality of existence itself. In a word, God is Nature. (not ''nature'' as in trees and shrubs and rocks, but ''Nature'' referring to the entirety of the system, the universe(s).

That brings me to God and how we relate to Him(or Her). In several holy books scripture points out that God has made us "in his own image." Nothing on the earth except human beings are created in God's likeness, we are told.

What can it mean to be created in God's likeness? It may very well be that He has designed us with all of His qualities, only to a lesser degree.

Human beings can reason, feel emotion, communicate, and also create. And like God, we have an invisible spirit. And we are self-aware -- "I think; therefore, I am."

God has created us as finite versions of Himself. This tells us something about the why of our existence: He created us to relate to Him.

We can consider ourselves, with all our unique traits, abilities, emotions and imagination, as qualities that are examples of God's own personality and character. He created us to relate to him, and we are living proof of that. Even though every human being is unique u we are all in God's likeness or image.

Being human also means we are in a position to recognize God. In every era of human history, and in every part of the world, human beings have actively acknowledged and engaged Him through worship.

We not only relate to Him because of our commonality, we are related in and share his Spirit, as all life does.
________________
Now for the big(BIG) picture:
At the heart of modern cosmology is a mystery: Why does our universe appear so exquisitely tuned to create the conditions necessary for life? In this tour de force tour of some of science's biggest new discoveries, Brian Greene shows how the mind-boggling idea of a multiverse may hold the answer to the riddle.
God Infinity Multiverse Quantuum