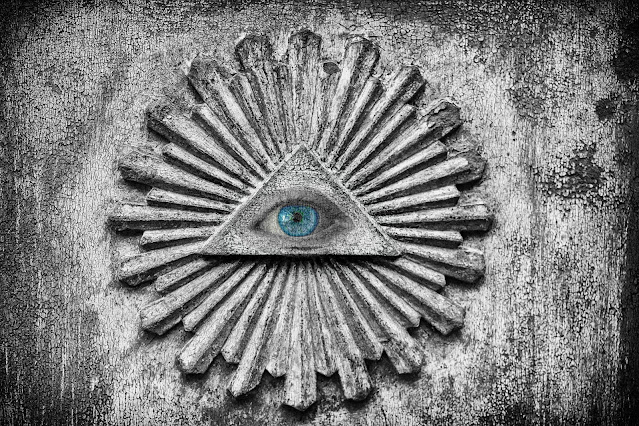 Conspiracy theories resist falsification and are reinforced by circular reasoning: both evidence against the conspiracy and an absence of evidence for it are re-interpreted as evidence of its truth, whereby the conspiracy becomes a matter of faith rather than something that can be proved or disproved. Research suggests that conspiracist ideation—belief in conspiracy theories—can be psychologically harmful or pathological and that it is correlated with psychological projection, paranoia and Machiavellianism. Psychologists attribute finding a conspiracy where there is none to a mental illness called illusory pattern perception.Conspiracy theories once limited to fringe audiences have become commonplace in mass media, emerging as a cultural phenomenon of the late 20th and early 21st centuries. 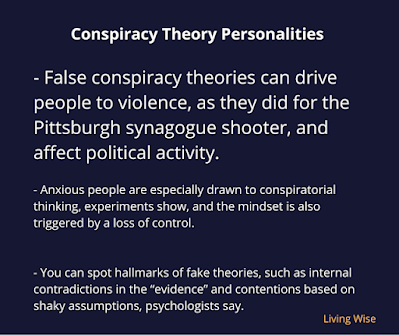 A conspiracy theory is an explanation for an event or situation that invokes a conspiracy by sinister and powerful groups, often political in motivation, when other explanations are more probable. The term has a pejorative connotation, implying that the appeal to a conspiracy is based on prejudice or insufficient evidence.

The dangerous consequences of the conspiratorial perspective—the idea that people or groups are colluding in hidden ways to produce a particular outcome—have become painfully clear.
The gunman who shot and killed 11 people and injured six others in a Pittsburgh synagogue in October 2018 justified his attack by claiming that Jewish people were stealthily supporting illegal immigrants. In 2016 a conspiracy theory positing that high-ranking Democratic Party officials were involved in a child sex ring involving several Washington, D.C., area restaurants incited one believer to fire an assault weapon inside a pizzeria. Luckily no one was hurt.

The mindset is surprisingly common, although thankfully it does not often lead to gunfire. More than a quarter of the American population believes there are conspiracies “behind many things in the world,” according to a 2017 analysis of government survey data by University of Oxford and University of Liverpool researchers.
The prevalence of conspiracy mongering may not be new, but today the theories are becoming more visible, says Viren Swami, a social psychologist at Anglia Ruskin University in England, who studies the phenomenon. For instance, when more than a dozen bombs were sent to prominent Democrats and Trump critics, as well as CNN, in October 2018, a number of high-profile conservatives quickly suggested that the explosives were really a “false flag,” a fake attack orchestrated by Democrats to mobilize their supporters during the U.S. midterm elections.

One obvious reason for the current raised profile of this kind of thinking is that the U.S. president is a vocal conspiracy theorist. Donald Trump has suggested, among other things, that the father of Senator Ted Cruz of Texas helped to assassinate President John F. Kennedy and that Democrats funded the same migrant caravan traveling from Honduras to the U.S. that worried the Pittsburgh synagogue shooter.

But there are other factors at play, too. New research suggests that events happening worldwide are nurturing underlying emotions that make people more willing to believe in conspiracies.
Experiments have revealed that feelings of anxiety make people think more conspiratorially. Such feelings, along with a sense of disenfranchisement, currently grip many Americans, according to surveys.
In such situations, a conspiracy theory can provide comfort by identifying a convenient scapegoat and thereby making the world seem more straightforward and controllable. “People can assume that if these bad guys weren’t there, then everything would be fine,” Lewandowsky says. “Whereas if you don’t believe in a conspiracy theory, then you just have to say terrible things happen randomly.” (source)

Summary
He says that these people tend to be uncooperative, distrustful, and socially isolated — which is why believing in a conspiracy theory with strangers on the internet can give them a sense of belonging.