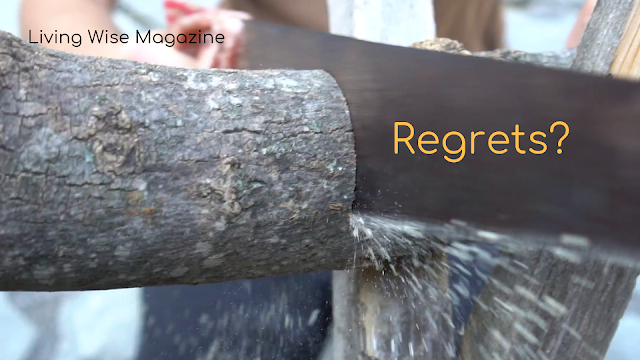 Do you worry about past events or things you should have done(or not done)? Is regret a constant companion?

This great read by Mr. Carnegie is fully relevant to life today. People had been worrying and regretting well before 1944 and will likely worry a lot in 2019 and beyond.

What would you do if I told you to 'go saw sawdust'? You'd probably laugh and then say, ''Well that's pretty damn stupid.'' and say to me, "What sense would that make, its already sawed, done with, finished.'' I would say, ''Exactly!'' and then I might say, ''It's the same thing as crying over spilled milk, isn't it?''

In the above example the only reason I would say such a seemingly ridiculous thing is that the person I said it to was either regretting a past mistakes and some how trying to fix one by dwelling on it or living comfortably in the past, and neglecting his present. ''Don't Saw, Sawdust'' is one of those idioms that are short, sweet reminders we all need from time to time.

How then not to either live in the past, or try to change it?

Take action, do something. If you feel guilt every time you think about how you let your son down during a bad period, don’t just stew about it. Use the emotion of regret as a powerful motivator. Energy is energy. Use the energy generated by powerful feelings like anger, embarrassment as a springboard toward positive action. Reach out and tell your son how deeply sorry you are.

Things could have been worse. If you are regretting an argument with a friend and now really wish you hadn't called him an overbearing idiot just imagine if you had called him something worse. Or what if your friend wasn’t such a forgiving person? What if you had never even become friends?” Realizing that things could be worse, or aren’t as bad as they seem pulls you out of the past into the gratitude of the present. Gratitude is such a comforting thing.

Look for the hidden benefits, the silver lining. Regrets can be a rich source of lessons and gifts. Your regrets have taught you to be more emotionally stronger or, after a time, strengthened an important relationship. Even events, such as losing a loved one, can have positive value, such as when people who’ve lost loved ones in tragic circumstances re-channel their regret into foundations or organizations to help other families facing similar situations or losses. They’ve made their loss meaningful. This is one of the best ways of 'letting go'.

Look at the big picture. Sometimes our regrets focus on small details(saw dust?) and distract us from our overall goals. Let's say you had a bad day at work because sales were at an all-time low, you might beat yourself up over things you didn’t do or should have done differently. But how's the bigger picture? When you take a step back from your small regret, you will see that your current situation isn’t great, but your life isn’t ruined and your goal is still in reach.

Learn from your mistakes.That's the primary reason for studying history. Think about a past mistake in the right way. Think about how it happened, how it felt, how you know it would affect you if it happened again. This will reduce your chances of repeating it.

Finding wisdom letting go. Age and regret have a close relationship. A Canadian government study in 2005 of people between age 60 and 95 found that they don't have any more intense regret than younger adults. The study calls this disengagement, a term that describes the eventual withdrawal of effort and commitment. Participants in the study were those who were not burdened by their regret, because they had stopped trying to undo the consequences of their regrets. In their wisdom, they simply let it go...

We're taught to try to live life without regret. But why? Using her own tattoo as an example, Kathryn Schulz makes a powerful and moving case for embracing and handling our regrets.