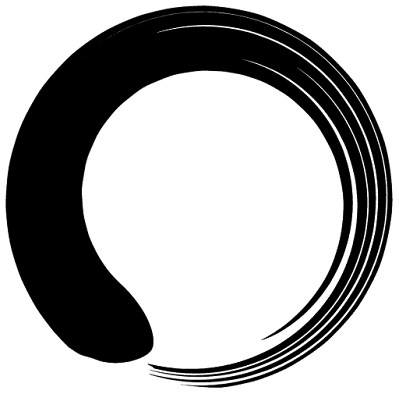 The ensō symbolizes absolute enlightenment,
strength, elegance, the universe, and mu (the void).
by Michael Corthell
Quantum theory postulates the instantaneous connections between two entangled quantum objects such as electrons.
This phenomenon has been seen in laboratory experiments and scientists believe they have proven this. It's not about faster than the speed of light. Speed has got nothing to do with it. These entangled objects instantly communicate at a distance. That means distance has no meaning.  a million light-years have no meaning. The amount of space between two 'things' has no meaning what-so-ever.
Realistically(and actually), the entangled objects are not even communicating. They are the same thing, they are one.
At the quantum level , everything may be actually or theoretically linked. All is one. Sun, moon, stars, rain, you, me, everything. An there is no 'equality,' because in order to have 'equality' we need to have an 'other' to be equal to.

"We experience ourselves, our thoughts and feelings as something separate from the rest. A kind of optical delusion of consciousness."
― Albert Einstein
"In our quest for happiness and the avoidance of suffering, we are all fundamentally the same, and therefore equal. Despite the characteristics that differentiate us - race, language, religion, gender, wealth and many others - we are all equal in terms of our basic humanity."
― Dalai Lama
“The assumption that animals are without rights and the illusion that our treatment of them has no moral significance is a positively outrageous example of Western crudity and barbarity. Universal compassion is the only guarantee of morality.”
― Arthur Schopenhauer, The Basis of Morality

Nobel Prize winner Erwin Schrodinger once observed that quantum physics is compatible with the notion that there is indeed a basic oneness of the universe. It may seem as though the world and the Universe are full of many divisions, many people throughout the course of human history and even today really and truly believe that individual things are part of some fundamental entity. It is a common and natural thought.

What Does This Have To do With Non-Violence?

What happens when we secularize the belief in oneness? In a recent series of studies, Kate Diebels and Mark Leary tried to find out.

Their main finding? People who believe that everything is fundamentally one differ in crucial ways from those who do not. In general, those who hold a belief in oneness have a more inclusive identity that reflects their sense of connection with other people, nonhuman animals, and aspects of nature that are all thought to be part of the same "one thing." The belief in 'oneness' is the basis for universal equality.

My main finding? Now, more than ever in human history, we all would benefit from a oneness mindset.

All is One Equality Quantum Universe