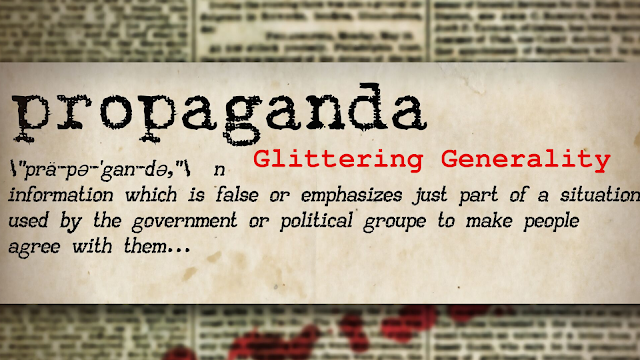 
We can also define 'glittering generalities' as 'name calling in reverse'.

People will believe in, fight for, live by 'virtue words' about which we have deep seated, emotional ideals and beliefs. Such 'virtue words'(generalities) include: civilization, Christianity, good, proper, right, democracy, freedom, patriotism, motherhood, fatherhood, science, medicine, health, and love. (at the end of this article I'll show how to guard against being taken in by this tactic)


This propaganda tactic is used by politicians and advertisers to persuade the audience to buy some
product or idea, to support them in their cause, or to do something that everyone else is doing(this is called the 'band wagon' propaganda device which is covered fully on a previous article).

The term 'glittering generality' dates from the mid-19th century America.  Advocates for abolition of slavery argued that the enslavement of human beings for any purpose was contradictory to the United States Declaration of Independence's statements that "all men(humans) are created equal" and possessed natural rights to "life, liberty, and the pursuit of happiness." Pro-slavery opponents countered that the Declaration was a collection of inspirational statements intended for revolution, rather than a concrete set of principles for civil society.

Rufus Choate, a U.S. senator and a Whig from Massachusetts, brought the term into general use in his August 1856 public letter to the Maine Whig Committee. In the letter, Choate expressed fear that antislavery Whigs, inspired by the Declaration's "glittering and sound generalities," would destroy the Union. Abraham Lincoln, in an April 6, 1859 letter to Henry L. Pierce, criticized political opponents of the day who downplayed the foundational principles of Thomas Jefferson as "glittering generalities". Lincoln argued that Jefferson's abstract ideals were not mere rhetoric, but the "definitions and axioms of free society."

The term then came to be used for any set of ideas or principles that are emotional appealing but nonspecific. In the 1930s, the Institute for Propaganda Analysis popularized the term as one of its "seven propaganda devices".

A glittering generality has two main qualities;  it is vague(sometimes very vague) and it has very positive meanings and even heartfelt associated with it. Words and phrases such as "common good", "reform", "courage", "democracy", "freedom", "hope", "patriotism", "strength", are terms with which people all over the world have powerful associations, and they may have trouble disagreeing with them. However, these words are highly abstract and ambiguous, and meaningful differences exist regarding what they actually mean or should mean in the real world. George Orwell described such words at length in his essay "Politics and the English Language"

George Orwell: ''The words democracy, socialism, freedom, patriotic, realistic, justice have each of them several different meanings which cannot be reconciled with one another. In the case of a word like democracy, not only is there no agreed definition, but the attempt to make one is resisted from all sides. It is almost universally felt that when we call a country democratic we are praising it: consequently the defenders of every kind of regime claim that it is a democracy, and fear that they might have to stop using that word if it were tied down to any one meaning. Words of this kind are often used in a consciously dishonest way. That is, the person who uses them has his own private definition, but allows his hearer to think he means something quite different. Statements like "Marshal Pétain was a true patriot," "The Soviet press is the freest in the world," "The Catholic Church is opposed to persecution," are almost always made with intent to deceive. Other words used in variable meanings, in most cases more or less dishonestly, are: class, totalitarian, liberal, reactionary, equality.''

Well, who wouldn't get behind that?

How to guard against being taken in by this tactic

The Institute for Propaganda Analysis suggested a person ask these questions when confronted with this technique:

What does GLITTERING GENERALITY mean?