This propaganda technique evokes an emotional response(highly desirable and effective in propaganda), which stimulates the target audience to identify with recognized authorities. Often highly visual in today's media environment, this technique often utilizes symbols superimposed over other visual images. A common example of this technique in the United States is for the President to be filmed or photographed in front of the country's flag (or hugging the flag). Another similar technique used in advertising is celebrity endorsement.


The propagandist/advertiser,marketer carries over the authority, sanction, and prestige of something we all respect and revere to something he would have us accept. If the propagandist succeeds in getting a church or a nation to approve a campaign on behalf of some program, he then can transfer its authority, sanction, and prestige to that program. Then the people probably will accept something which otherwise they might reject. 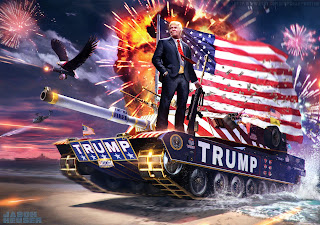 Transference is an appeal that helps a person imagine themselves as part of a picture. Look at the image above and ask yourself these questions:
_____________

This is just one of a series of fake political ads Ben made for a project in his Media Literacy class. Each one demonstrates a different propaganda technique. This one focuses on Transfer. Transfer is a propaganda technique in which a politician uses images or symbols that are universally respected and tries to transfer all of that good emotion onto his cause. Common images are the American flag and war heroes, and even though the politician may actually have nothing to do with those images, he will still use them to make himself look better through association. You can combat the effects of the Transfer propaganda technique by trying to view the politician on his own merits, and not for the symbols he has surrounded himself with.