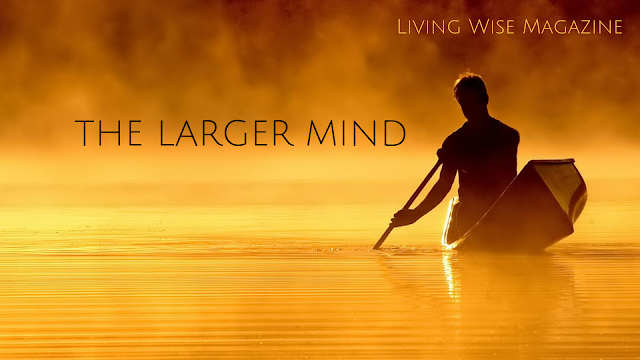 There is a 'larger mind' out there.

The collective unconscious, a term first coined by Dr. Carl Jung. It refers to structures of the unconscious mind which are shared among sentient beings of the same species. The lower life forms also have this innate structure of the mind. According to Jung, the human collective unconscious is populated by instincts and by archetypes, that is universal symbols such as the 'Great Mother', the 'Wise Old Man', the 'Shadow', the 'Tower', 'Water', the Tree of Life, and many others.
Dr. Jung was and is still considered to be a little 'out there', but there is much supporting evidence now and recently discovered information from the distant past also support his idea of an in born, shared and experiential knowledge.
My theory is one that is, and shared by many others, that this area of the human mind is a spiritual and inherited store of information that is tied tightly to the Infinite Intelligence we know as God. It is the fountain of new ideas, as well as a depository of the way our species behaved during its development.
The collective unconscious is an universal starting point, and a 'library of common knowledge'.  Every human being receives this psychic library/framework during the development of the brain during gestation. It is instilled. You can't gather this 'mind architecture' through education or other conscious effort, because it is inherited and God given.
This static information is a universal library of human knowledge, or the 'sage' in us, (experiential  wisdom or senex) in mankind. It is the Infinite Intelligence and wisdom (of God) that guides mankind.
After we understand what it is, how then can we use it?
I use the term 'collective unconscious' in the same way Jung described it, and as I learned it in college, but also use the same term to describe the life force of the Holy Spirit of God.

Dr. Einstein, who used this creative faculty practically to its fullest extent possible, describes it this way:
''The intellect has little to do on the road to discovery. There comes a leap in consciousness, call it intuition or what you will; the solution comes to you and you don't know how or why. The truly valuable thing is the intuition.''
—Albert Einstein
What he is referring to, of course, is the Infinite Intelligence of God (Holy Spirit). The universal life force— its mechanism being the Collective Unconscious.
The human race (and other sentient races) have a Universal Mind. It is just there, created and curated by the spirit of God. And it is not just a static framework, but a part of the Holy Spirit that processes the information by mixing with the collective unconscious of all other life forms' instinct and reasoned knowledge on Earth and even with life on other worlds.
Like a spiritual computer, it can be tapped into and used to translate information back to people as inspiration (Creative Intelligence) Once we are shown how, or stumble upon it, we can tune in and download a revelation, compose a song, create a work of art, or write a book and many other things that come into our thoughts by way of this great store-house of knowledge and experience.