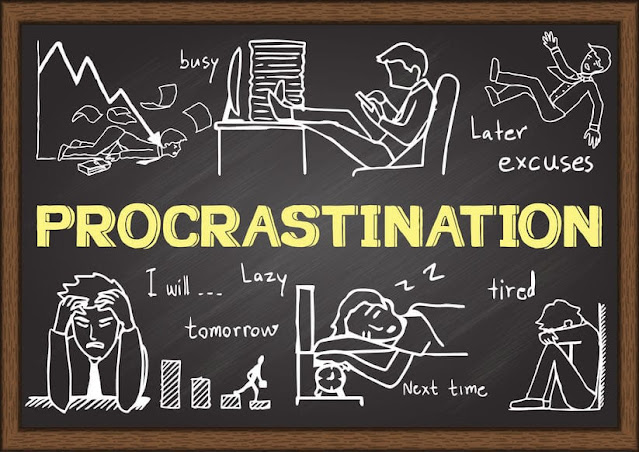 We set goals, but then we procrastinate. We write a to-do list, and then don't follow through.
This happens time and time again. Wow, what's the problem? Many of us are really good at thinking about and planning what to do, but really awful actually doing those things. Why is that?

''Do not put your work off till to-morrow and the day after; for a sluggish worker does not fill his barn, nor one who puts off his work: industry makes work go well, but a man who puts off work is always at hand-grips with ruin.''
― Hesiod

There are a thousand and one ways to be unsuccessful in life, but the surest way just might be procrastination. Procrastinators sabotage their own plans. They lay down stumbling blocks for themselves. They actually choose ways to fail.

Twenty percent of people identify themselves as procrastinators. Procrastination for them is a lifestyle ― a very maladaptive one.

Procrastination is a learned behavior.  Procrastination is learned within the family, but not directly. It is one response to harsh parenting style. Having a harsh, controlling father keeps children from developing the ability to regulate themselves. Procrastination ends up being a form of rebellion.  Procrastinators then may turn to friends for support, and their friends will reinforce procrastination because they can be more tolerant of their excuses not to do things.

Procrastination is an evolutionary behavior. Studies have found that there is a genetic and evolutionary link.

Many studies have shown that procrastination is a failure to self-regulate, much like other bad behaviors that have to do with a lack of self-control, such as overeating, gambling and other addictive behaviors. Other researchers say it's not a matter of being lazy or poor time management. They say it may actually be linked to how our brain works and to deeper perceptions of time and the self.

Whatever the cause, let's look at how to stop it or at least minimize it.

Take smaller bites, break your work into smaller steps. We can find a task overwhelming. Break it down into little parts, then focus on one thing at the time.

Hang out with inspirational positive people. Identify the people who inspire you – the go-getters and hard workers. Be with them more often. Positive people motivate us.

Buddy up. Having a partner makes the whole anti-procrastination thing much more fun. It's not necessary for you both to have the same goals, but it would be better, so you can learn from each other.

Announce your goals. Tell everyone about your projects. Then, whenever you see them, they are bound to ask you about your status on those projects. This builds up accountability and responsibility.

If someone else has over-come this, you can too. Seek people out who have quit procrastinating and connect with them. See the living proof that your goals are indeed achievable if you take action.

Get ahold of yourself and just DO IT! As always, in the end, it comes down to taking action.

Setting goals and planning but not taking action is like faith, without works, leaves you dead in the water and going nowhere.

'Inside the Mind of a Master Procrastinator'

In this TED Talk, internet writer Tim Urban explains what happens in the mind of a procrastinator—and why one specific form of waiting until the last minute leaves a lot of people feeling unfulfilled.