Religion and The Psychology of Evil 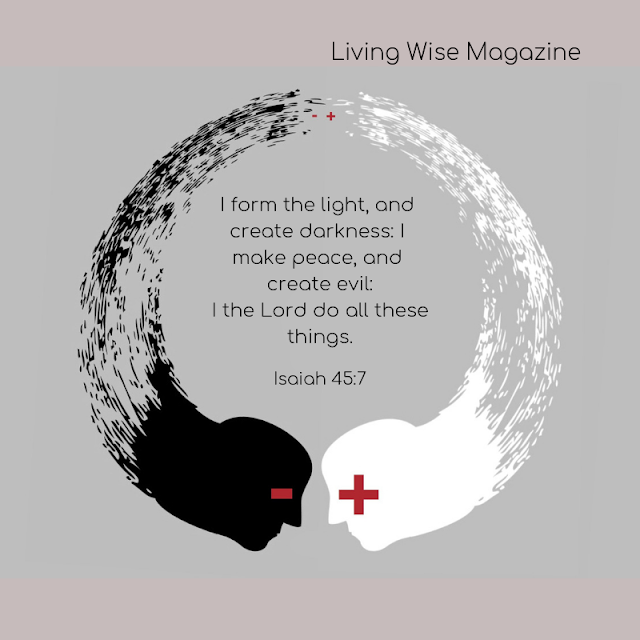 This brief article is about evil and how it invades everyone's life, but as the image above shows it is also about not forgetting who the boss really is....who's really in charge. So...

Live by the golden rule and you can't go wrong...

Here we go. Say you get to know a couple who, as far as you can see, have a loving family. They also are people who deal honorably and fairly with people in business, as well as their customers. By their actions, you can see they are good; when someone they know is sick, or in some other crisis, they're likely to bring the family food and help in any way then can.

They are people who will stop to help someone who is stranded when their car breaks down. Maybe they are even the kind of people who, when a natural or man-made disaster strikes, go out and buy — out of their own pocket — supplies that will be helpful to the victims, and even go there to help out.

But, then, at the same time, they also vote for an evil, and dishonest politician, and become loyal to the most destructive political force to ever arise in America and the world.


''Beware of false prophets, who come to you in sheep’s clothing, but inwardly they are ravenous wolves. You will know them by their fruits. Do men gather grapes from thorn bushes or figs from thistles? Even so, every good tree bears good fruit, but a bad tree bears bad fruit. A good tree cannot bear bad fruit, nor can a bad tree bear good fruit.''
— Jesus Christ(God), in Matthew 7:15-20

What are we to make of that? Do they closely identify themselves with this evil personality(just like him in belief) or do they just like some of this political leader's policies?

From our observations some are just like this evil personality; liars, racists, and narcissists, but the majority of this evil entity's followers, and supporters only like some of the policies of their chosen leader.

They are practicing 'the ends, justify the means' thinking, in other words, any methods used, even if the are bad, are okay as long as the cause is just or 'all's well that ends well'.

Humanity has been there many times before, and it always ends badly. Evil always destroys itself, as well as innocent people who happen to be in the way.

The other question is, does this support by otherwise good people, of an evil human being, taint them in some way? If you believe in Karma and God's judgment the answer is yes.

How much? God only knows.

It may be easier to support an evil politician at a distance, than say an evil co-worker. But, I ask you to consider this; does your support of the evil entity add to his power? Yes, it does. Do you want that? Do you want this evil to grow stronger and cause more potential harm?

Many supporters enable and excuse their chosen leader bad behaviors by comparing his actions to perceived evils done by other politicians, many who are no longer in power. To them it has to be said, 'Two wrong don't make a right'.

Live by the golden rule and you can't go wrong...right?

''By the fruit, the tree is to be known. An evil tree cannot bring forth good fruit.''
— President Abraham Lincoln
Philip Zimbardo knows how easy it is for nice people to turn bad. In this talk, he shares insights and graphic unseen photos from the Abu Ghraib trials. Then he talks about the flip side: how easy it is to be a hero, and how we can rise to the challenge.