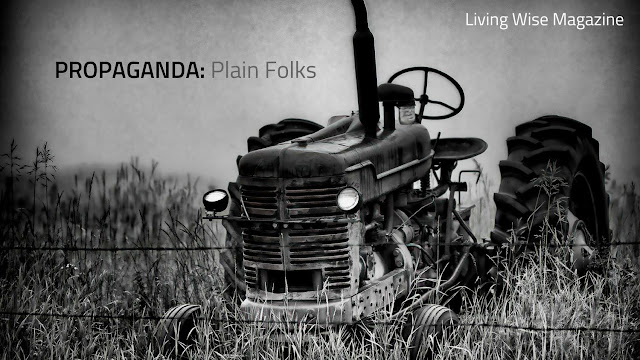 A plain folks propaganda device is one in which the speaker presents him or herself as an average Joe, that is a common person (working class) who can understand and empathize("Hey, I'm just like you!'' with a listener's concerns. The most important part of this promotion is the speaker's portrayal of themselves as someone who has had a similar experience to the listener and knows why they may be skeptical or cautious about accepting the speaker's point of view. In this way, the speaker gives the audience a sense of trust and comfort, believing that the speaker and the audience share common goals and that they thus should agree with the speaker. Also using an "ordinary background," such as a park or a building, depending on the item(or person) you are advertising, will usually give it a higher possibility of more customers.

America's recent presidents have all been millionaires, but they have gone to great lengths to present themselves as an ordinary 'Joe'. Bill Clinton ate at McDonald's and confessed a fondness for trashy spy novels. George Bush Sr. hated broccoli, and he loved to fish. Ronald Reagan was often photographed chopping wood or riding his horse, and Jimmy Carter presented himself as a humble, 'plain folks' peanut farmer from Plains, Georgia.

We are all familiar with candidates who campaign as political outsiders, promising to "clean out the barn" or ''drain the swamp'' in Washington. The political landscape is full of politicians who challenge the mysterious "cultural elite," by aligning themselves with 'ordinary' American citizens. But, as of this writing(2019), baby boomers are approach their sixth decade, and America is no longer shocked by the sight of politicians in denim who listen to rock and roll.

When  confronted with this device, we should suspend judgement and ask ourselves the following questions: