'Gaslighting' is a tactic in which a person or entity, in order to gain more power, makes a victim question their own reasoning and reality. It works much better than you may think. Anyone is susceptible to 'gaslighting', and it is a common technique of abusers, dictators, narcissists, and cult leaders. It is done slowly(like dimming a light), so the victim doesn't realize how much they've been brainwashed. For example, in the movie Gaslight (1944), a man manipulates his wife to the point where she thinks she is losing her mind. The number one tactic in 'gaslighting'? The perpetrator tells blatant lies and makes the victim less able to use reason and critical thinking. The 'gaslighter' creates a very strong delusion. 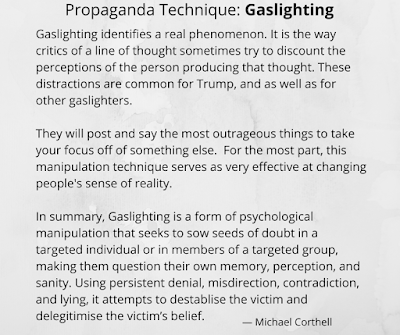 The manipulative tactic of 'gaslighting' is where propaganda blatantly crosses the line, because it intentionally mixes what is false with what is plausible, and even acceptable fact, then begins to gaslight people; that is warping a persons sense of reality to the point where they doubt their own memory of events they experienced. It is very psychologically dangerous and is often associated with abuse in personal relationships but now is being seen on a mass scale.

Here are the highlights:

The 'gaslighter' (narcissist, abuser) will:

1. Tell you extraordinary blatant lies(very often the 'Big Lie'over and over).
2. Deny they ever said something, even when you have proof(even video).
3. Use what is near and dear to you as ammunition against you.
4. Wear you down over time.
5. Use actions that do not match their words.
6. Throw in positive reinforcement to confuse you(flowery praise).
7. Understand fully that confusion weakens people.
8. Project their own shortcomings and sins on you.
9. Try to align people against you.
10. Tell you or others that you are crazy.

11. Tell you everyone else is a liar but them.
12. Call you derogatory names. (Crooked Johnny, Lyin' Lorretta etc)

One of the biggest concerns people have is; do 'gaslighters' know they're manipulative, or do they do so without realizing they are doing it? Yes and no. But for the purposes of this series I will focus on the person who does manipulate purposefully: the narcissist.

The most dangerous part of the propaganda continuum is indeed 'gaslighting', because it can be part of an authoritarian's personality. A person with an authoritarian personality tends to think in absolutes: Things are 100 percent right or 100 percent wrong. When a 'narcissist gaslighter' thinks they are not the problem and everyone else is, this is called having an ego-syntonic personality. It can be very difficult to get ego-syntonic 'gaslighters' into treatment; they believe nothing is wrong with them.

But, finally, if a person is practicing gaslighting behavior even without being consciously aware of it, they may get a “reward” when their victim becomes more dependent on them. And then the cycle repeats. The 'gaslighter' also gets a 'boost' when there are no checks and balances in place—no one holding them accountable(not punished) for their behavior. For example, a cult leader or dictator may exile or kill anyone who tells others that the leader is not treating followers fairly. Subsequently, further followers may not speak out because they are in fear of their lives. Keep in mind that glowing promises of good things (dependency) is one of the goals of 'gaslighters'.