About Cults and Cult Leaders 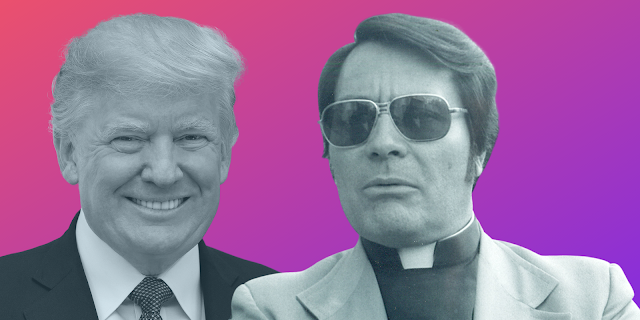 Former President Trump shares 50 traits with Rev. Jim Jones and other cult leaders. Have a look.
by Michael Corthell

In the Fall of 1978 more than 900 people committed mass suicide. They all belonged to a cult headed by Pastor Jim Jones. They killed themselves because one, drug addicted man told them to.
In the media they were referred to as being part of the “Jonestown cult”. The most telling aspect of the Jonestown cult was the total control Jones exerted on what his follower thought, or believed. As documented in the book, The Suicide Cult, extreme punishments were meted out to anyone who defected even in the slightest way – including expressing the slightest doubt in “Pastor Jones” (who was often called “Father Jones”).

My purpose in writing this article is not to accuse any group. It is only to warn you. God often has used sheep as a symbol for groups of people. There is a reason for that. We can we easily led. We look to leadership. We look to a leader who will tell us what to do and what to think. And we often do it because we are lazy and want our 'parents' to take care of it and have the responsibility. Our 'parents' being a larger entity; a group or a government.

The need to 'follow the leader'(and put the responsibility on him), the need for friendship, acceptance and validation of self are among the top reasons why people get involved with a cult.

A cult leader often uses deceptive tactics that can make activities seem like exciting group events. Cult leaders can also be very deceptive to make followers and others feel like they are part of something special. They may promise the individuals certain benefits that they would not be able to find anywhere else.

People who do not have many friends, or have a difficult time in social situations and have trouble forming bonds are most likely to get involved with cult activities. The leader will prey on these types of people and will manipulate them into joining he on a mission to save something. A person who was leading an otherwise normal life may be subjected to immoral or even criminal activity, and tactics of force.

Most people don’t find and join cults through Internet searches. Most people stumble upon them accidentally. Cults are energized by and thrive on control. A human being's willingness to surrender control comes from excessive devotion to the leader and the leader’s vision. (put the responsibility on him or her)
The leader’s personal agenda is presented as a universal cure for what ails you (or civilization), one that will absolutely eliminate both personal and world-wide moral, ethical, and spiritual evils. The follower’s faith becomes both the provider and the enabler. Simply put the cult leader becomes a imitation god. Please note: (every human being is born with a dedicated space in their created being(soul and spirit) for God. It has to be filled by Almighty God, the Creator and not another human being.)

It is a common trait among all of humans to long for the security and protection of our parents, to have someone watch over us, and guide us. The game of life for every person born into this world is to find our way, our own path to self-actualization. When a person longs too much for parental protection, they regress, go back to being child-like. People often like being told what to do because it relieves them of responsibility. It is very, VERY dangerous to do this. Read this article for an example of what following a cult leader can and may lead to.

Finally, do you want to live in a great country and a great world? How do we achieve that goal? We do great things for ourselves and others by taking charge of our own lives, by being responsible for ourselves. By owning our own mistakes. A great nation, a great society and great civilization is made up of great individuals working together.


''The politician clearly believed in the idiom, 'that the end justifies the means', since he used all kinds of nefarious means to get elected.''

Do not abdicate your responsibilities by becoming a sheep or a lemming. And always remember that the ends never justify the means.

Claire Ashman was born, raised, and birthed 9 children in a cult. She shares how the prevalence of cults and cult-like thinking affects everyday people. In Australia there are over 3000 cults, with some 600,000 members, meaning we all know, or have had contact with at least one person who is a member of a cult. Cults and secretive groups fill certain voids that all people feel at some point in their lives. Everyone has had a time in their lives when they've felt vulnerable or directionless. For some people, it's easier to have someone give you the answer than living through the pain.

Ashman shares awakening for cult-member’s friends, colleagues and family members to recognize the signs and be present to support upon exiting a cult. Ashman is now happily married, of her own free will, to a supportive raising their 10 kids together. By day she motivates women to take control of their own lives, by night she drives people to free thinking in her Uber.